Argentine goalkeeper Emiliano Martinez is determined to become the number one goalkeeper for both club and country. The 27-year-old has been with the Gunners since the summer of 2010 but he has managed just 16 appearances with much of his playing time spent on loan spells away from the club. 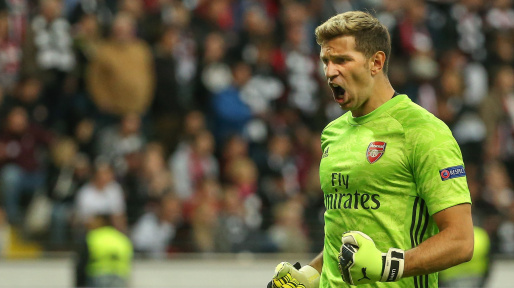 This has somewhat changed this season with manager Unai Emery handing him with the goalkeeping duties for the Cup competitions and the Argentine is now determined to push for the number one role, he told: “That’s [being No.1] what I’m working for. We’ve worked really hard. To play for Arsenal you have to challenge everyone.

“Matt challenges me and I challenge Bernd. Since I signed for this club my goal was always to be a No.1. I’ve been here for 10 years, I came as a young boy and now I’m a grown man. Some loans were good, some were bad. That’s the dream, I won’t stop until I’m the No.1 for Argentina. Do I feel I’m the best? Of course.”

Martinez produced a superb performance during the 3-0 Europa League triumph over Eintracht Frankfurt last month and that has contributed towards a second call-up by Argentina. The South America heavyweights have constantly changed goalkeepers since moving on from Sergio Romero and Martinez could make a strong case for the starting role.

The Gunners graduate was previously called up by the national team eight years ago but back then, he was left on the substitutes’ bench. Martinez has already featured in a couple of games this term and he should start between the sticks during the forthcoming Europa League group stage clash against Standard Liege at the Emirates Stadium. The north London giants are clear favourites to make progress beyond the group stage and they should register a comfortable triumph over Liege, barring a shocking performance.